Blogmas has surprised me by being much more challenging than I initially thought it would be. Finding the time to write was what I was initially worried about, but actually trying to keep creating fresh content is much more difficult! I’ve given up on a lot of the #BigBlogmasProject2014 prompts for now as I wasn’t having fun writing a lot of them, and it seems a bit silly to post them for the sake of it. The prompts were pretty much my back-up for Blogmas and I feel like a bit of a fish out of water without them (is that the phrase?) – so I’m trying to just take it day by day and write whatever I feel like writing about. 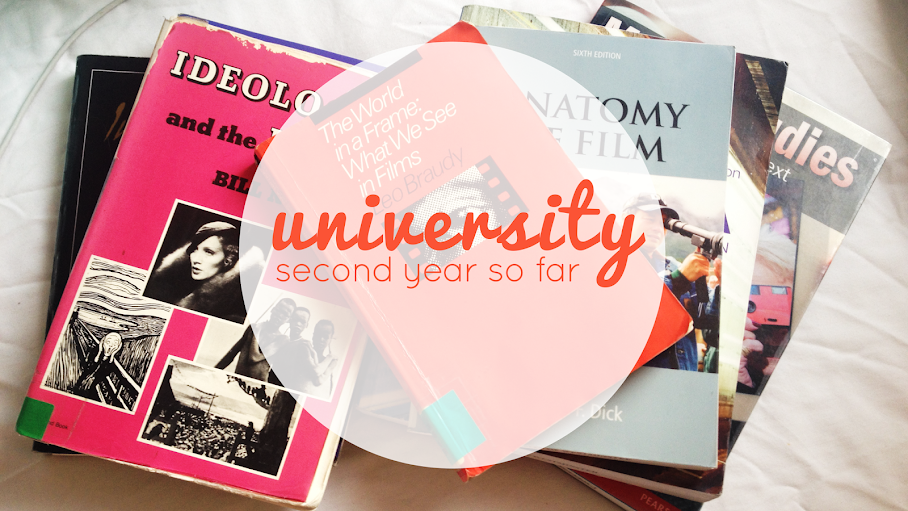 Around this time last year, I wrote a post reflecting on my first term at uni (here) so I thought it would be fun to do a similar one this year to compare.

This year has definitely been more full-on from the word go. I’ve had two theory modules and two practical modules this semester, all of which have been challenging in their own ways. One thing I’ve enjoyed more this year is being able to work with people I actually like working with, and I’ve also learned a ton of new skills. Last year I knew the basics of a lot of what was covered, but this year I’ve got to work with animation which is something I’ve never done before, and in my new media module I’ve been working with software like Arduino to create really exciting things.

I’ve also felt much more involved with the university this year, having signed up to be a student ambassador and working two of our open days. I’ve met people from other courses who I wouldn’t have had the chance to meet otherwise, and it’s just been a really great first semester so far, even if the work has been a huge step up from last year. I really wish I’d joined a society, I definitely feel like I’m missing out a bit.

Important things to remember:
Leaving everything to the last minute still won’t work in your favour.
Moving out of halls will cause you more stress than you ever knew was possible.
Getting books out of the library is cool. Finding people have drawn all over the pages you need is not.
Having time to go out and get drunk is a luxury – girl’s nights in are wonderful.

Hiya I'm Megan, a 25 year old navigating her way through adult life one creative venture at a time.

Had my first invisalign consultation at @thesmileg

Just wanted an excuse to show off my new glasses o

All about those cosy morning vibes ☺️ Can anyo