I was in two minds on how to do this post as I also want to write about my 2017 stats as a whole, but I’ve decided I’m just going to post this as normal and then follow up with a sort of 2017 stats/goal reflection/2018 blog goals post later. I have so many post ideas at the moment but I’m stressing slightly that they all have to be done at the start of the year to be relevant and I definitely should have pre-written some stuff. But better late than never right?

I got involved with Twitter at the start of the month and scheduled loads, but got lazy the closer it got to Christmas. I was still active on the platform liking and retweeting things, but I didn’t really do anything for my brand. I gained 37 followers which is probably my lowest for a while, but I didn’t really do anything worth following me for. I do want to use Twitter more this year, and not just for tweet scheduling. I want to take part in more chats but also just engage more in general. Being more liberal with likes, chatting to people who ask questions; I want to get involved!

So you know how I decided to go all pretty in pink over on Instagram back in November? Yeah, bye to that. It was way too dark out for me to maintain any sort of beautiful pink theme in December. So what did I do? I had a mini-meltdown about how shit my theme was, and then I started uploading. Like no gradual fade, just jumped straight in with a brand new theme. My favourite photos by far are the tree ones. I’ve loved getting some practice in with my Olympus PEN and the 40mm lens. I think 2018 is the year for more creativity on Instagram, but I’ll talk about that more in my next post. I lost 17 followers which is a bit of a bummer but in all honesty I’m done caring since I hit 1k and I barely posted last month so I’m not entirely surprised. I’d love to reach some more milestones this year (like 10k, gal gotta get that swipe up feature), but I know my content hasn’t been the best so that’s definitely something to work on. 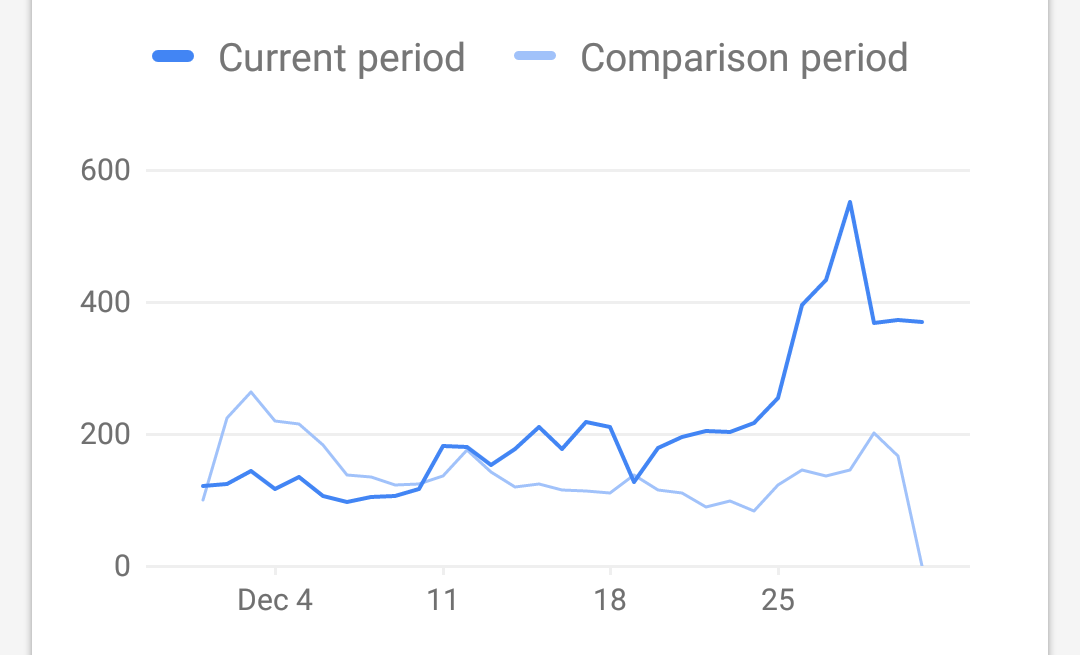 My stats went a bit crazy this month and it’s 100% because of everyone getting new bullet journals for Christmas and starting them in the new year so THANK YOU PINTEREST. Just look at that beautiful post-Christmas spike. Even at the start of the month though, I was maintaining 100+ views a day which is still incredible to me.

I was definitely right about the amount of content I’d have time to write last month (i.e. none). I managed two posts in December, and neither were anything groundbreaking. My November blog and social stats came first, shortly followed by my December advertisers post. I had good intentions for writing more posts but I just never got around to it. So now we’re in the first week of Jan and I’m frantically trying to get all my ideas into drafts but waiting for the weekend to take a million and one photos to accompany them. I can barely wait.

Thanks for reading my last blog and social stats update of 2017! I’ve got big plans for the year ahead which I can’t wait to share with you. Make sure you’re following me on Twitter so you’ll be notified when I post. Or hit the plus button on that Bloglovin’ widget below. Do people still use Bloglovin’? I hope so. See you next time!