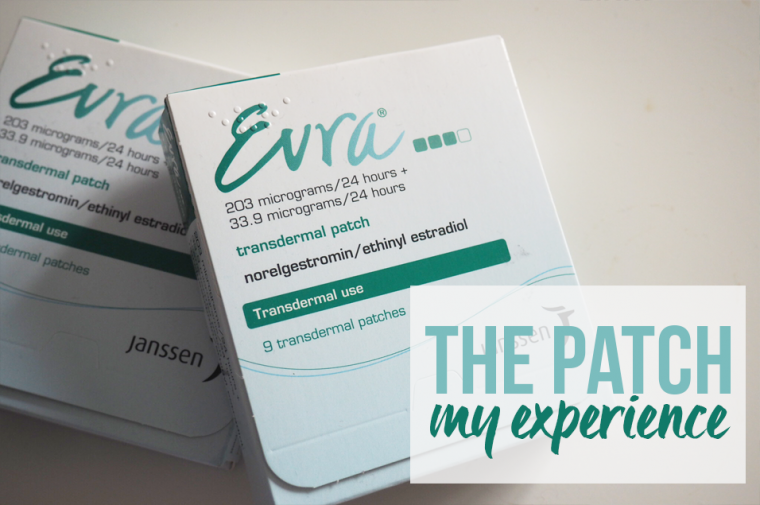 I’ve written about my experience with the implant a couple of times (here & here, notably) but the time has come for a new method of contraception: the patch.

I can safely say that I think I’ve finally found a method of contraception that works for me. With that said, I’m not going to sit here and persuade you to get the patch because you might find another method that suits you down to the ground, but I do think it’s a method that isn’t very widely recognised (my mum didn’t even know what it was when I told her) and when it’s pretty much the same as the combined pill but a million times easier to remember, I do think it’s worth knowing about.

The patch basically works in the same way as the combined pill. It contains the same hormone, and you use it for three weeks before having a one week break. Each patch is worn for one week, so you get three patches a month which you change on the same day of the week, before having a week off. As with any method of contraception there are both down and upsides, but for me the positives outweigh the negatives.

Positives:
– You don’t have to remember to take it everyday
– It’s easy to use
– It doesn’t come off easily
– It comes with reminder stickers (I like stickers)

Negatives:
– It’s visible on the skin
– Doesn’t protect against STI’s
– It gets dirty easily

The main reason I got the patch is because I cannot hack life on the pill. The hormone is what I need, but the stress of remembering to take a pill at the same time every single day is not. Each pack of patches comes with little stickers that you can put on your calendar/in your diary to help you remember when to change your patch. I do stick these in my planner but I also have an alarm on my phone just in case.

The patch is great because you can put it wherever you want (as long as the area is smooth and hairless, and isn’t your boobs) so you can choose to put it where you feel most comfortable. Mine’s on my hip because to me that’s the place where it seems most out of the way and isn’t visible to anyone who isn’t me or Sam. I alternative the side of my body I have it on each week. In terms of it being visible, this isn’t something that bothers me massively, though I can see why you might want a method of contraception which isn’t visible on the skin.

Another potential downside to the patch is that it gets fuzzy super quickly. You know when you keep a plaster on a little too long as it goes a bit black and furry around the edges? Yeah, that happens. I’m yet to find out if this is just because of where I put it or if it’s just a thing that happens, but it’s not all that pretty and because the patch is so sticky the fuzziness isn’t easy to remove.

Whilst there are downsides, for me these are totally outweighed by the simplicity of the patch. If you’re a bit like me and find taking the pill a bit of a chore then the patch might be an option to consider. Like I said at the start, I’m not trying to force my ideal method of contraception on anyone, but I feel it’s an underrated alternative to the pill which is just as effective and just as easy to use.

Have you ever used the patch? Would you consider it?