This post is probably a long time coming but I’ve been having a lot of thoughts recently about getting older and quite frankly, it’s kind of depressing. I’m turning twenty at the end of next month and the fact that I’ll no longer be a teenager fills me with much more dread than it probably should. Over dinner the other day, my family and I were discussing what we would like to be doing in five years time and it really got me thinking. Couple that with posts that I’ve seen floating round recently like the 20 before 20 post that Lauren did, I’m really starting to want to make the most out of my life and what better way to do so than to compile a list. 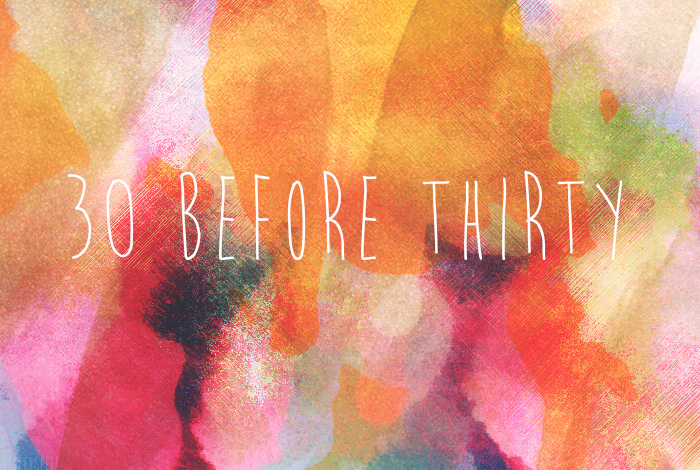 1. Graduate with a first. I think I’ll probably end up graduating with a 2:1, but I really hope I’m still motivated to put the effort in over the next couple of years to at least do my absolute best, even if I don’t get a first.

2. Move out of home. In a way I’ve kind of done this; I have my own flat which I am currently renting in London with my uni flatmates, but I’m still at home during the holidays. Once I finish uni I don’t really want to come back to living with my parents full-time unless I absolutely have to, and I’d like to think by the time that I’m thirty I’ll be financially stable to live on my own.

3. Have a job I love. I know that I’m a big one for settling. I’ve been in my current job for over three years just because it’s convenient and I hope by the time I’m thirty I’m at a stage in my life where I can do something I love rather than something I have to do.

4. Be in a long-term relationship. I’m not too fussed about being engaged/married by thirty as you can do that whenever, but I’d like to be in a serious relationship and thinking about settling down, if not having already done so.

5. Visit Italy. I would really love to get to know Italy as a country and visit multiple times.

6. Visit New York. I went to New York in 2010 and was absolutely blown away. Don’t get me wrong, I love London, but there’s something about New York that I just find absolutely fascinating and I’d love to go back some day.

7. Learn French. I know I said I wanted to visit Italy more, but I really love the French language. I learnt French for around seven years at school and whilst some things I can remember quite vividly, other things I just can’t, and I think French is a really useful language to have as it’s spoken in loads of different countries.

8. Photograph more weddings. I’d really like to do wedding photography as a hobby. I’ll definitely need more practice before I’m able to really go about this, but hey – I’ve got ten years!

9. Make a short film. Part of the reason I did my university course was because I wanted to get more knowledge of short film making, and yet in my whole first year I didn’t make any conventional short films. By the time I’m thirty I really want to have made something that I’m proud of.

10. Get fit. Possibly a bit of a cliché one, but I know my metabolism will slow down one day so I’m determined to get fit throughout my twenties.

11. Make more friends and stay in touch with old ones. Do you ever sit and think about who you’d invite to your wedding? I’m awful at keeping in contact with people and I’m genuinely concerned that I’ll get to a stage where I’m sending out wedding invites and I’ll literally have about three people I can invite. Making new friends isn’t always easy, but I hope my twenties and thirties will see me thrive more with new people.

14. Go on a road trip. Such a stereotypical teenage girl answer, but I wanna go on a roadtrip! Whilst travelling across the states would be pretty cool, I also think just driving through Europe would be pretty fun too (and probably cheaper).

15. Learn to cook. I can get by with a pasta dish, but everyone knows you don’t have to be a michelin star chef to cook pasta. One day I’d like to be able to cook meals that are dinner party worthy.

16. Do the colour run or the elecrtic run. I don’t even like running, but both of these look really fun and I’d love to be a part of one or both of them.

17. Tie-dye party. With 90s style coming back into fashion, I’ve really had the urge to tie-dye recently, and why not do it with a group of friends? I’d really like to do this before I turn twenty, but it’s going on the list.

18. Learn HTML coding. Back in the day I leant some basic HTML by making layouts on Neopets, though sadly a lot of it I can’t actually remember and isn’t necessarily relevant when it comes to things like blog layouts. I always had a bit of a passion for coding and I’d love to get back into it properly.

19. Go on a really romantic date. There’s two sides of me when it comes to dating; the girl that thinks everything vaguely romantic is cringey and stupid, and then the hopeless romantic on the inside who’s yelling at the other girl to shut up. Camping under the stars or something, I don’t know.

20. Write more for fun. I forget how much I enjoy creative writing until I actually sit down and do it. I don’t want to have anything published as such, I just want to write for fun in my free time.

21. Take more photos. It sort of goes with #8, but sometimes I forget about taking photos that aren’t for a project deadline and I just want to go exploring more with my camera.

22. Get over my fussy eating. I’m a really fussy eater. I have been known to eat off the children’s menu on more than one occasion purely because it was catered more to what I wanted to eat. By the time I’m thirty I want to be able to enjoy food more.

23. Stop biting my nails. I always just thought I’d grow out of this one, but aged nineteen I’m still finding it really bloody difficult to stop. It’ll happen one day I’m sure, but let’s give it a deadline.

25. Read more books. I especially want to read more ‘proper’ literature and I guess as a thirty-year-old, there’s definitely certain books you should have read.

26. Ride a camel. When I went to Morocco with my family on a day trip a few years ago, we were offered the chance to ride a camel and I turned it down. My mum was the only one who did it and it’s always been something I regretted not saying yes to!

27. Swim with dolphins. I did this in Florida in 2012 at Sea World, but obviously they’re not exactly wild dolphins and the fact that it was sort of a structured show took the fun out of it quite a lot. I’d love to swim with dolphins that are a bit more free.

28. Go on an African Safari. It always seems like such an amazing experience and I think it’s something I’d really enjoy.

29. Go to Australia. I’ll probably be petrified the whole time about poisonous spiders and the like, but I think Australia seems like a really interesting place and I’d love to be able to go.

30. Visit Canada. I probably should have grouped all the countries together, but I can’t be bothered to change it now. I’d like to go to Canada, even if it’s only to like, Toronto for a couple of days.

Well, at the age of 19-going-on-20, this is my list of 30 things I would like to achieve before I am thirty. I might do another one of these posts in a few years if I’m still blogging, but for now, this is it.

Do you want to do any of these things? Have you done any of them?